What is the Wisley Airfield Development?

Taylor Wimpey, one of the UK’s largest housebuilders, now own Wisley Airfield and have commenced consultation in advance of a major planning application for a new settlement of 2000 houses.

The development immediately adjoins the Elmbridge border at Old Lane, Ockham just two miles from Cobham centre. It is around nine miles from Guildford Town Centre. Despite the proximity to Elmbridge, and Cobham in particular, it will be Guildford Borough Council who will decide the application. Elmbridge Borough Council will hopefully be a formal consultee but our representations may well carry less weight than those of residents within GBC’s boundaries.

With this in mind, CDRA has secured a seat on the Community Liaison Group, set up by Taylor Wimpey for local residents to give feedback prior to application.

The CDRA arranged a meeting with representatives of Taylor Wimpey to discuss the impact of the Wisley Airfield development of 2100 houses on Cobham and Downside. To view the slides presented by Taylor Wimpey's click below: 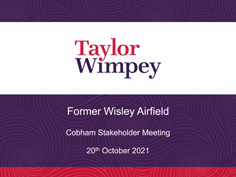 Further detail of the proposals can also be found in their vimeo newsreel at: https://www.wisleyairfield.com/

Attendees were limited to an agreed maximum of twenty on the ‘Teams’ platform. They included Elmbridge Councillors Alan Parker and James Browne, with Mary Lewis representing David Lewis our Surrey Councillor, members of CDRA and other local organisations.

Taylor Wimpey (TW) explained that they would be submitting a hybrid planning application at the end of October 2021. That means that details of housing phases are likely to be ‘in outline’ only with numbers and tenure of homes identified rather than their final appearance. Some of the early housing and infrastructure will be ‘in detail’. This implies that a series of reserved matters applications will follow over a number of years. This is now the norm for large housing development.

TW explained the amenities in settlements near the new development that have been included in their proposals either as a condition of the Guildford Local Plan or those regarded as desirable by new residents, see slide below: 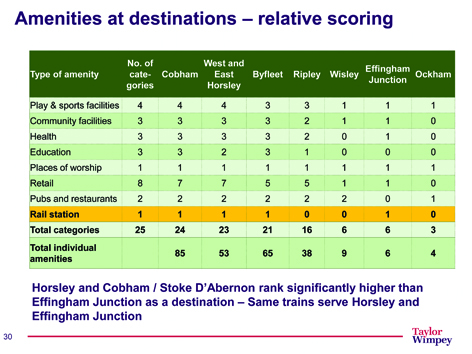 It was pointed out to TW that the use of these amenities by the new development’s residents will impact the nearby settlements and Cobham along with the station in Stoke D’Abernon will play a prominent part in providing facilities and services. TW said that:-

These points each raise concerns on the impact of the development on our community which we share with other smaller communities neighbouring the site. However, for Cobham, even though these 2100 new homes on Green Belt are on our doorstep, the planning decisions will be made by Guildford Borough Council (GBC) not Elmbridge (EBC). EBC are however statutory consultees and any representations the Council make will carry greater weight than individual residents. EBC are also preparing the final draft of their Local Plan.

Many residents may wish to object to the concept and housing mix of the development directly to GBC. However, we should all also consider what mitigation should be negotiated in advance by EBC should GBC approve it.

This should take two paths. Firstly, the recognition and mitigation of impacts on our communities should be included in the EBC Local Plan. 2100 homes and a population increase of up to 5000 people will have an impact in our area. Secondly, to lobby our EBC councillors and officers to ensure that specific mitigations are included in the conditions and development agreements in any planning permission granted by GBC. When the hybrid application is released for public consultation CDRA will provide commentary and guidance to residents on how this can be followed through but meanwhile we continue to lobby our Councillors on the issues identified above.